The Great Reset is a move by the rich and powerful to grab more power and wealth, and it will have global economic, political and social consequences.

Who Rules the World?

Large corporations, rich investors, and oligarchs of USA rule the world. This is authoritatively discussed in the book "Who Rules the World" by Noam Chomsky. Book review here.

They rule the world by financing(and thereby controlling) the Deep State.

- Chapter 13: Whose Security? How Washington Protects Itself and the Corporate Sector. Page 152.
Despite the piteous laments, the United States remains the world’s dominant power by a large margin, with no competitor in sight, and not only in the military dimension, in which, of course, the United States reigns supreme.

China and India have recorded rapid (though highly inegalitarian) growth, but remain very poor countries, with enormous internal problems not faced by the West.

Nothing is certain. For every article on The Great Reset, there is another one saying the exact opposite and calling it a conspiracy theory.

It could take years(but not decades) for Great Reset to manifest. It will likely be a 'slow moving coup' where change happens slowly so people will not notice or realize it, and so won't oppose it.

The real agenda being pushed by the Deep State will not be revealed. Global media and thinktanks will work to spread FUD(Fear, Uncertainty, Doubt).

However, we can infer from Deep State's actions what the Great Reset is.

The Deep State's objective is to acquire power and wealth. They don’t care about the planet, human life, climate crisis, public or anything else. They are driven by mental sickness of extreme narcissism and have no hesitation to destroy the world in their pursuit of power.

Noam Chomsky's book 'Who Rules the World' gives several examples where the mentally sick narcissists in power took the world to the edge of global destruction. Only the actions of low and mid-level individuals saved the planet.

"This lack of clarity, combined with the plan being launched by an influential organisation, provided fertile ground for conspiracy theories to grow". - BBC Reality Check.


Why there will be a Great Reset?

The Great Reset is a move by the rich and powerful to grab more power and wealth, and it will have global economic, political and social consequences.

"When you factor in unfunded liabilities in Medicare and Social Security, the debt skyrockets to well over $100 trillion(3x the GDP of USA). That amount can never be paid off." - Schiff Gold.

USA has borrowed heavily, and the borrowing is likely to increase over time. 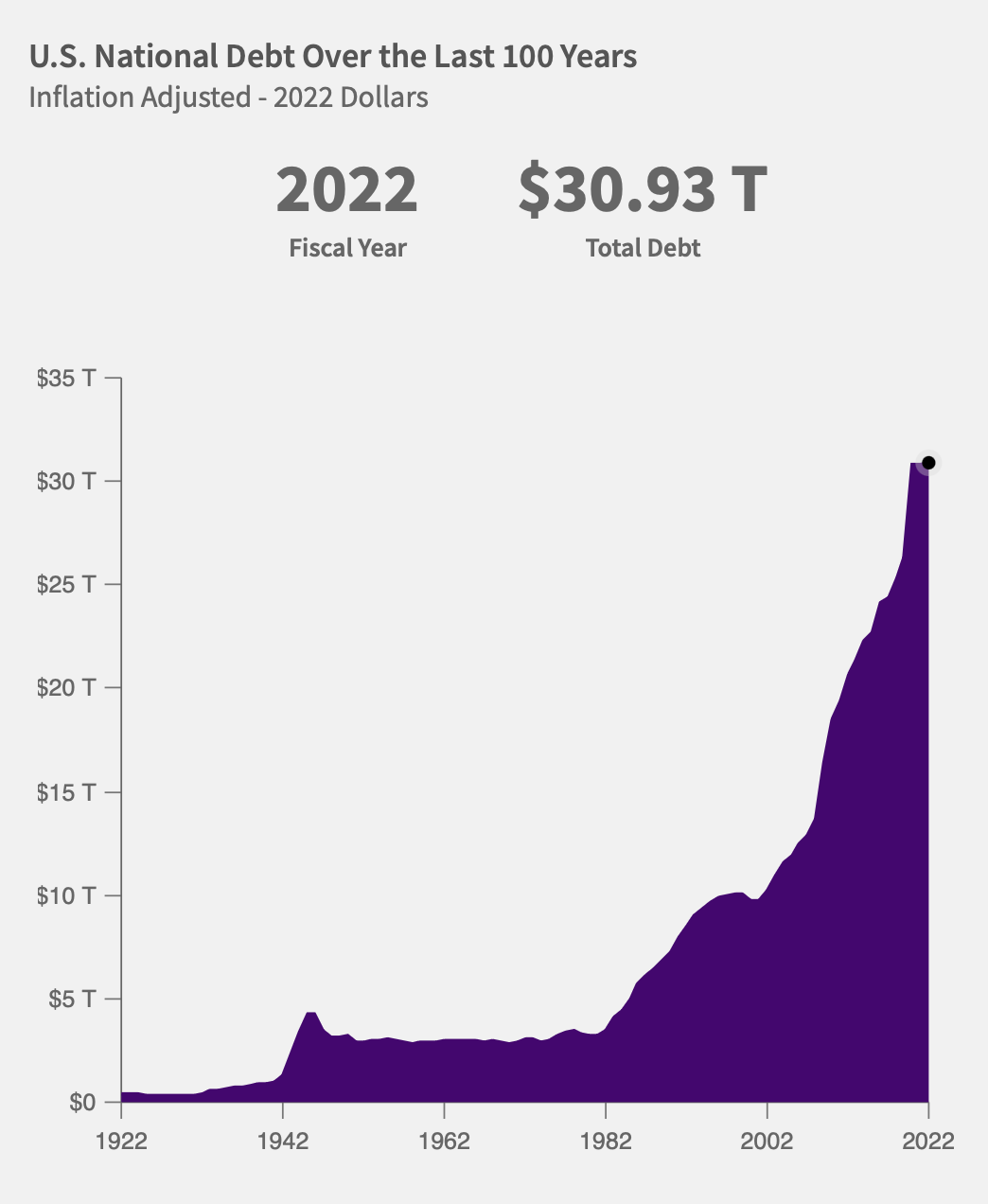 
USA debt is rising, and the interest rate is also increasing. This makes paying debt twice as hard.

USA will spend more on Interest payment than it spends on military by 2029.

Rising debt is one of the components triggering the Great Reset.

There will be a Great Reset because of a perfect storm of several developments. We are at cross roads of History. The global economic system is changing as a result of new ideas and technologies, failure of existing systems, incompetent governance, and obsolete technology.

Here are some of the major simultaneous changes which will trigger the Great Reset:

Americas debt: Time for a great reset of the financial system. A 30-year debt supercycle that has fuelled inequality illustrates the need for a new regime"

Decline of America and Rise of China: "a major geopolitical contest between America and China is both inevitable and avoidable" – Kishore Mahbubani, Singapore Diplomat, author, former President of the United Nations Security Council, and Dean of National University of Singapore.

End of pax Americana and change in perception of America: USA is seen as a rogue superpower internally and across the world. The actions of its out of control Deep State are now a threat to life on Earth. “the single greatest external threat to their societies,” and that “the prime rogue state today is the United States,” to quote Samuel P. Huntington, Harvard professor of the science of government, and Robert Jervis, president of the American Political Science Association.

Fourth Industrial revolution: AI, drones, solar power etc. which will lead to shift in balance of power and wealth to the East.


Claims of the Great Reset

There are 3 claims of The Great Reset as per the WEF(World Economic Forum):

Steer the market toward fairer outcomes: This is just lies to get public support. No global financial organization is going to work towards ‘fairness’. They work for their corporate backers.
Investments advance shared goals: e.g. investment to fight climate change. More lies.
Fourth Industrial revolution: technological advances are inevitable. The Great Reset simply incorporates this while contributing nothing to it.

Empty agenda full of fluff and lies like the one above is the reason why there is so much confusion and talk of conspiracy theories around the Great Reset.

The purpose of the published agenda is to mislead the public and get support. The real agenda is never revealed and is silently and swiftly pushed in the background.

The manipulative and deceptive use of language by elites is one of the book’s recurring themes.
serve to sugar-coat a harsh reality, namely that these programs would engineer the gradual impoverishment of everyone outside the ruling elite.

Great reset will promise a better world, but give us global fascism and techno-feudalism(ਨਵੀੰ ਜਾਗੀਰਦਾਰੀ).


What is the Great Reset?

Great Reset is a move by the rich and powerful to grab more power and wealth, and it will have global economic, political and social consequences.

The Great Reset "objective is to establish, wherever possible, a new equilibrium among political, economic, social, and environmental systems toward common goals. Ultimately, the only limit within this category is our collective imagination. As we emerge from a moment of great crisis, we can imagine a "great reset."
Source: Rockefeller foundation.

"The closest parallel is the post-World War II era, which led to massive economic and societal changes." - Source: Bloomberg.

Who Rules the World: Noam Chomsky
Model for prosperity for Punjab

Who Rules the World: Noam Chomsky